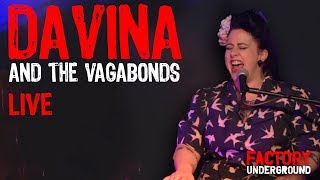 Davina and the Vagabonds on Factory Underground Live

Factory Underground is back with the second video in the Factory Underground Live series, featuring Davina and the Vagabonds performing “Stop Playing (With My Heart).” Since exploding onto the scene in 2005, Davina and the Vagabonds have grown from a down-and-dirty blues band into one of the most exciting acoustic ensembles on the international stage. This high-energy quintet has established itself with a stellar live show, a professional look, and good old-fashioned hard wor 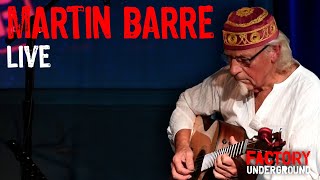 Introducing Factory Underground Live, a new live performance series featuring a diverse collection of artists. We will be releasing a new episode every week on our Youtube channel, so stay tuned! The first episode features our very special guest, Martin Barre of Jethro Tull, performing a cover of Steve Winwood and Blind Faith’s 1969 hit, “Can’t Find My Way Home.” Along with fellow band members, Dan Crisp and Alan Thomson, Barre delivers a riveting acoustic performance of this

Norwalk-based classical pianist Elina Christova dropped in to record two more Bulgarian piano pieces with studio engineers Kenny Cash and Tom Stewart. Last spring she recorded Alexander Vladigerov’s variations on the popular Bulgarian folk song “Dilmano, Dilbero” with them, and has now added the same composer’s “Toccata” to her tracks. The second composition was the “Autumn Elegy” by Alexander’s father Pancho Vladigerov, which comes from his Three Pieces Op. 15. Although it s

Kenny Cash is finishing up the score for BEING, an upcoming Horror Film, directed by Douglas C. Williams. Kenny was chosen by Connecticut based film company, Three Feet From Gold, to create soundtrack for the film. Layering a number of different synthesizers including our vintage analog Moog, Kenny created a stunning, anxiety-inducing soundscape. The film features Lance Henriksen (aliens, terminator), Robert John Burke (Tombstone, 2 guns), Ben Browder (Guardians of the Galaxy

Anna Raimondi came to Factory Underground to record the audiobook for “Conversations With Mary,” in our state-of-the-art studio. Raimondi is an internationally renowned medium and spiritual counselor who has made guest appearances on the Dr. Oz Show as well as several national radio shows. In this book, Raimondi channeled the Virgin Mary and transcribed their conversation. In Touch Weekly described the book as, “...[an] insightful and inspirational guide to modern spiritualit